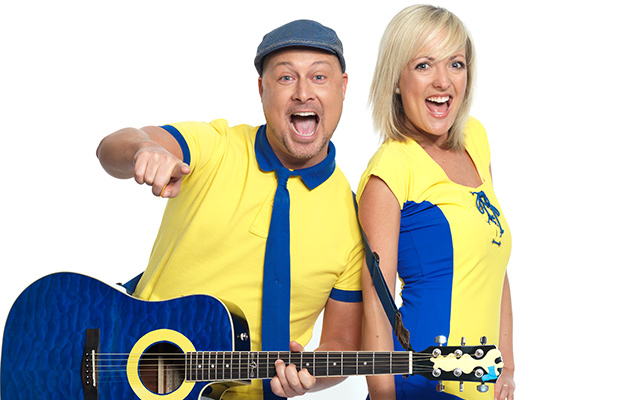 Splash'N Boots are becoming a staple in the next generation of Canadian children’s music. Seen daily on Treehouse TV, Canada’s number one pre-school network, Splash’N Boots bring music and laughter to 8.3 million homes across the country from their Big Yellow Boot. They have been nominated for a 2016, 2015 and 2014 JUNO Award for “Children’s Album of the Year” and thrice crowned Sirius XM Independent Music Awards’ “Canadian Children’s Music Group of The Year.” What started off as a class project at Queens University has led to the release of 10 Albums, four DVD’s and their own TV show, which has featured Fred Penner and The Wiggles. From Dubai to the Arctic, Bermuda, Australia, Italy and across North America, Splash’N Boots tour extensively doing what they love the most; creating opportunities for parents and children to enjoy and share music together, and enabling kids to feel empowered and positive. Unique and inventive, the tireless duo are constantly producing new material for the next generation of Puddle Jumpers. From social media to their philanthropy with Children Hospitals across Canada and Camp Ooch, a camp for Kids with Cancer, Splash’N Boots’ brand extends far beyond the stage alone. With the conclusion of their first national Headlining Tour, Splash’N Boots continue to be passionate about what they do, inspired by the children they meet and continually prove to have an undeniably fresh and heart-felt approach to family entertainment.