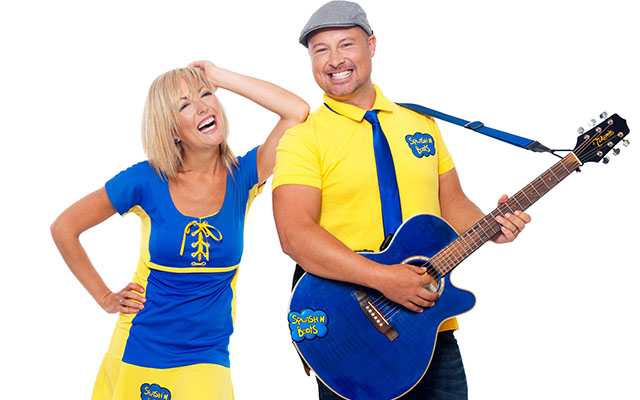 Nominated for a 2014 JUNO Award for Children’s Album of the Year and thrice crowned Canadian Children’s Group of the Year at the Sirus XM Independent Music Awards, Treehouse TV’s Splash’N Boots have brought their award-winning live shows to over 100,000 children worldwide since 2003. What began as a class project at Queens University has led to the release of eight CDs, three DVDs, national television exposure, across-Canada Filmed Live Tour with Treehouse TV, and performances with world- renowned children’s entertainers, The Wiggles.
Splash’N Boots’ growing fan base and tour schedule is a result of their authenticity and dedication to connecting with their audience. Their music is timeless and universal, creating opportunities for parents and children to enjoy the same entertainment, enabling kids to feel empowered and positive about their lives. Talented, unique and inventive, the cutting-edge duo are constantly providing their fans with new material, truly working 24/7 at building their business, brand and fans.
From social media, to their philanthropy with SickKids Hospital, Splash’N Boots’ brand extends far beyond the stage alone, they are passionate about what they do, inspired by the children they meet and continually prove to have an undeniably fresh approach to family music.