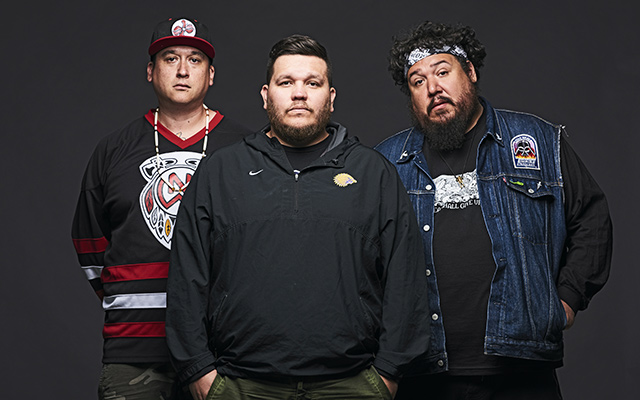 Jack Richardson Producer of the Year  2017

Canadian DJ collective, A Tribe Called Red (ATCR) is a modern gateway into urban and contemporary indigenous culture, celebrating all its layers and complexity. Made up of DJ NDN, Bear Witness and 2oolman, ATCR packs the dance floor while projecting indigenous stereotyping from movies, cartoons and media into a new political context accompanied by a dancer, mixing b-boy and traditional moves.

In 2012, ATCR was long-listed for Canada’s prestigious Polaris Music Prize for their self-titled album, which also made the Washington Post’s Top 10 albums of 2012.
In 2013, their second album Nation II Nation was shortlisted for the Polaris Music Prize and in 2014, they garnered mainstream recognition, becoming the first Indigenous group to
win “Breakthrough Group of the Year” at The JUNO Awards.

The crew has travelled all over the world and has performed at high-profile festivals including Coachella, Bonnaroo, AfroPunk, Osheaga, and New Orleans Jazz Fest to list a few. In September 2016, ATCR released their third album We Are The Halluci Nation. Pitchfork, Time, and National Post are a few of many press outlets that showed support for the album; helping the group create their own Halluci Nation, as well getting positive reviews by both Exclaim! and Pitchfork, with respective ratings of 10/10 and 8.1/10.