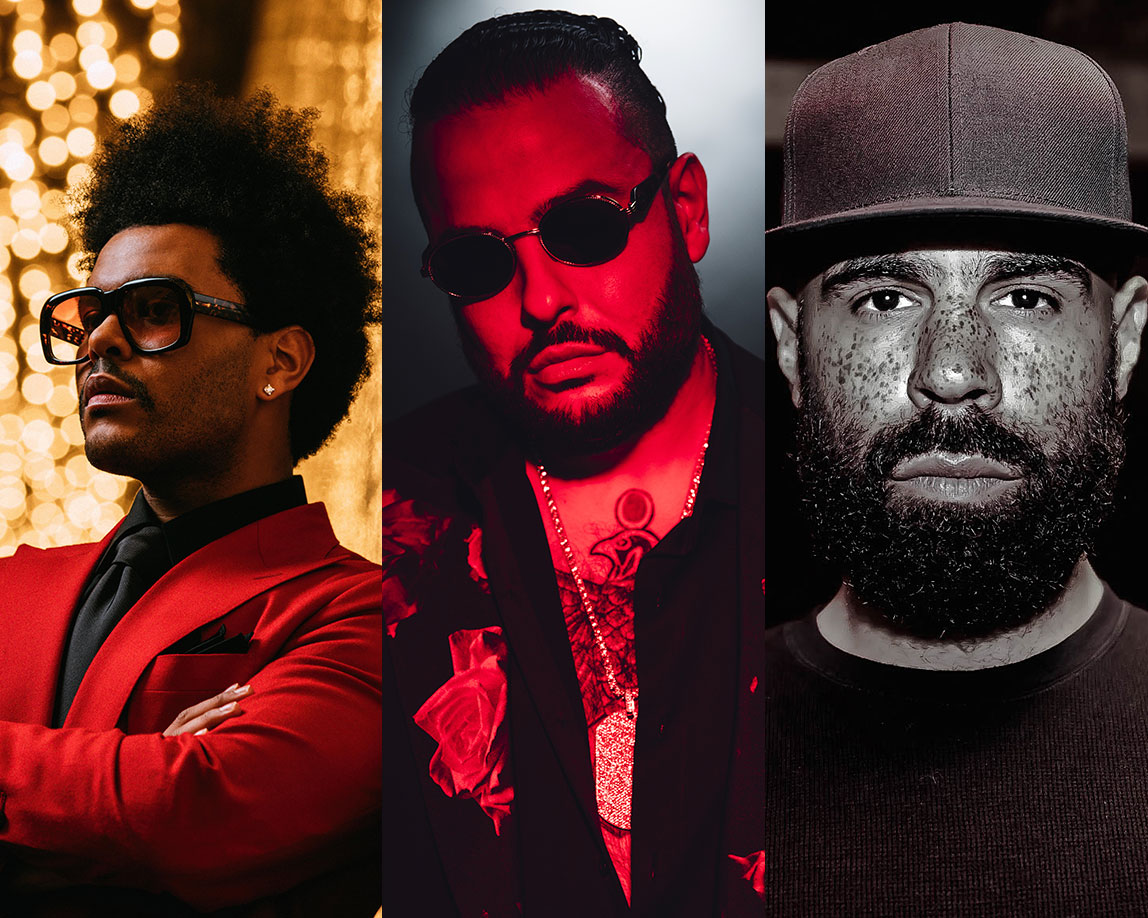 Filtering R&B and pop through an ambitious widescreen lens, The Weeknd took over popular music and culture on his own terms. The multi-platinum three-time GRAMMY Award winner is the #1 most listened artist in the world on Spotify and is a top 10 artist of all time for RIAA singles. His 2020 album After Hours is the #1 most streamed R&B album of all time (followed by his 2016 album Starboy at #2), and his 80’s nostalgic track “Blinding Lights” went 5X RIAA- certified platinum and broke the record for Billboard’s longest-running #1 on its US radio chart.

The track quickly became his fifth to go #1 on the Billboard Hot 100 (following Heartless’ immediate #1 debut), holding the spot for four weeks and later breaking the record for most weeks spent in the top five in the chart’s history. Alongside his gilded musical career, he’s graced the covers of CR Men, King Kong, TIME, Forbes, Variety, Rolling Stone, Esquire, Harper’s Bazaar, and GQ along with the late night stages with heralded performances on SNL, Jimmy Kimmel, Stephen Colbert and the VMA’s where he accepted the awards for Video of the Year and Best R&B. In recent times he has made acting appearances in TV and film with 2019’s film Uncut Gems as well as starring in and co-writing an episode of the hit show American Dad.

He generously shares, with over $2M in donations made in 2020 to various charities. The continuous record breaking of charts, sales and streams, headlining the biggest festivals and stadiums in the world, and his ever mysterious public persona combined solidifies The Weeknd as one of the most compelling and significant artists of the 21st century.

Belly is a multi-hyphenate singer, songwriter, rapper and producer. His full-length debut, The Revolution, went Gold in Canada, scored a Much Music Video Award, and solidified him as a national phenomenon. His introduction to The Weeknd turned into an undeniable creative partnership. After penning “Love Me Harder” for Ariana Grande and The Weeknd, he co-wrote six tracks from the chart-dominating 4X platinum 2015 epic, Beauty Behind The Madness. Together, they went on to craft “6-Inch” for Beyoncé’s Lemonade and in 2015 he was signed to Roc Nation by rap mogul Jay-Z. Soon after, he unveiled Up For Days mixtape including the RIAA Platinum-certified hit and #1 Rhythmic radio record “Might Not” [feat. The Weeknd]. Belly was named “Songwriter of The Year” at the 2016 SOCAN Awards & Juno Awards. Within that year, Belly co-wrote a majority of The Weeknd’s Starboy album tracks. In 2017 he released another tape produced by Boi-1da, titled Mumble Rap. In October 2018, Belly released Immigrant, a politically-fueled project just as powerful as its title. Most recently, Belly co-wrote half of the records on The Weeknd’s After Hours, including 5X platinum “Blinding Lights.” He also has a forthcoming album See You Next Wednesday, on the way.

Jason “DaHeala” Quenneville is a Canadian record producer and songwriter who has produced & written for artists such as The Weeknd, Halsey, Lil Uzi Vert, Belly and more. DaHeala grew up in Gatineau, Quebec in a household that spoke French and English. At the age of 13, he learned how to DJ at a youth center which led to him learning how to use FL Studio 3 (formerly FruityLoops). DaHeala first began working with The Weeknd on his 2013 album Kissland. In 2015, he Executive Produced the next album Beauty Behind the Madness. producing and writing several of the album’s biggest hits – “Often”, “Acquainted”, and “Earned It (Featured on Fifty Shades Of Grey Soundtrack)”. In 2016, DaHeala co-wrote five tracks on The Weeknd’s third studio album, Starboy, including the title track. Over the course of the next few years, DaHeala produced and wrote records for several other artists including Lil Uzi Vert, SZA, Travis Scott, NAV, Belly, Gessafelstein, Black Atlass, and more. He also Co-Executive Produced the soundtrack for Academy Award winning film Spider-Man: Into The Spider-Verse. In 2020, DaHeala Executive Produced The Weeknd’s fourth studio album, After Hours and co-wrote the #1 single “Blinding Lights”.