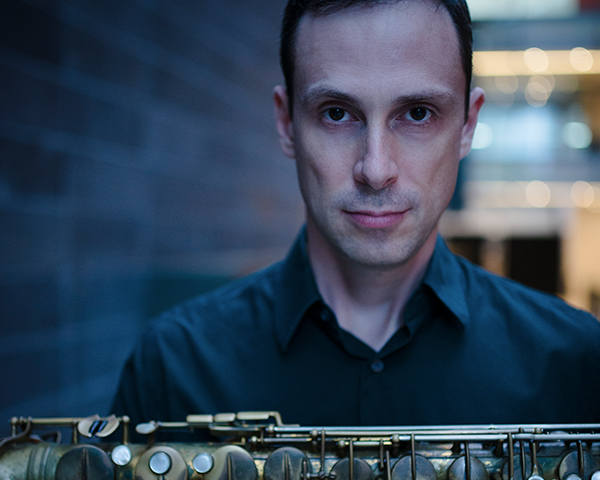 Saxophonist and composer Quinsin Nachoff has earned a reputation making “pure, bracing, thought-provoking music” that is “cliché-and convention-free” (Ottawa Citizen). Since moving from his native Toronto to New York City, Nachoff has made a habit of freely crossing borders: his music moves fluidly between jazz and classical worlds and is soul-stirring yet intricately cerebral. His passions reach into both arts and sciences, with physics or astronomy concepts sparking inspiration for exhilarating compositions.

Nachoff’s playing, described as “a revelation… parsing shimmers of Sonny Rollins, Wayne Shorter and Mark Turner” (DownBeat), was a semifinalist in the renowned Thelonious Monk Jazz Saxophone Competition. Earning numerous awards for skills as both composer and instrumentalist, Nachoff recently served as artist-in-residence at the National Music Centre and Banff Centre for the Arts.

A state of constant unpredictability is vividly captured in Nachoff’s remarkable group Flux, which features the stellar talents of saxophonist David Binney, keyboardist Matt Mitchell and drummers Kenny Wollesen and Nate Wood. The band has earned wide critical acclaim during performances throughout Canada and the US. Their second release, Path of Totality, thrives in the spaces between genres, styles and inspirations, furthering the innovations of their self-titled debut, which was nominated for a 2017 JUNO Award.