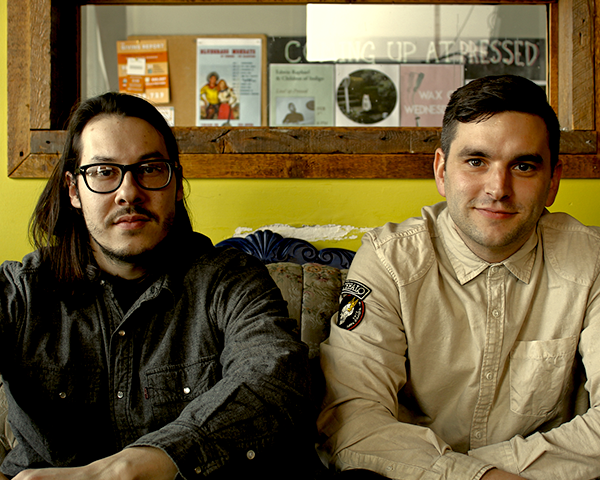 Gareth Auden-Hole, also known as Jack Pine, is the singer, songwriter, producer, and yes, art director of original alt-folk-Canadiana band Jack Pine and The Fire. For Left To Our Own Devices, Auden-Hole collaborated with talented Ottawa artist Emil Mateja to create a striking album cover with simple, bold colours and a classic approach to the overall package. The imagery depicts a remote cabin on fire in a forest of jack pine trees and a man stands in the doorway, his shape silhouetted by the flames that consume his home. The man's shadow is that of a wolf, a reference to the "wolf in human clothing" from the album track "Lone Wolf." On the back cover, and repeated on the disc labels, is a crow with a smoking match in his mouth, indicating that it was nature that burned down the lone wolf's home and signalling the predominant theme of human versus nature in the album's lyrics. Gareth laid out Emil's artwork with simple, bold black, white and red lettering and had it screen printed on brown kraft cardstock CD Digipacks and 12" LP Jackets (CDs by Superlink, LPs by Precision Pressing). Emil finally created three other illustrations relating to lyrics and themes of the album - these and Jack's "Lone Wolf" logo were used in the inside cover and accompanying lyric book for the CD Digipack as well as on the lyric laden back cover of the LP.

LEFT TO OUR OWN DEVICES – Jack Pine and The Fire
YEAR