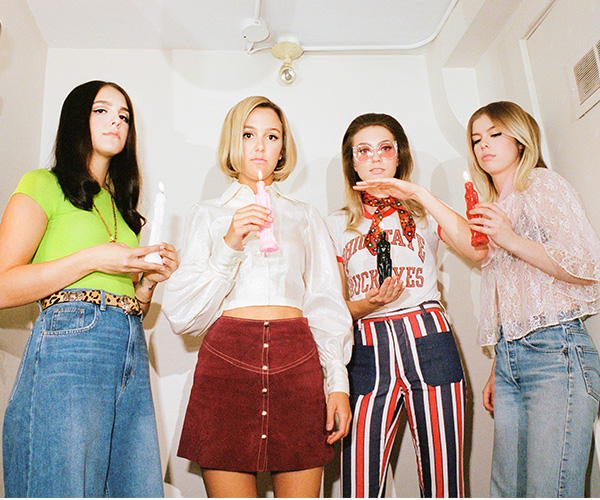 Toronto-based band The Beaches are a little bit glam rock and a little bit garage. They’re tremendously warm cool girls with an infectious edge—the kind you’d want to introduce to your parents and then sneak out and party with. However you break it down, The Beaches are 100% rock and roll. Comprised of sisters Jordan and Kylie Miller (on lead vocals/bass and guitar, respectively), Eliza Enman-McDaniel on drums, and Leandra Earl on keys and guitar, the band has a natural kismet that shines through on each of their tracks and in their live performance. Their songs flow with unparalleled ease, headbangers with resonance. Their love of rock and roll is obvious; with wide-spanning influences including Nirvana, The Strokes, Amy Winehouse, St. Vincent, FIDLAR, and Blondie, their songs translate easily to live shows, connecting with any kind of audience. Their first single on Island, “Give It Up,” is a hard-hitting, reverb-heavy anthem that calls for change in any context. “It’s not about giving up anything,” says Jordan, whose vocals on the track call to mind the Yeah Yeah Yeahs’ Karen O at her grittiest. “It’s more about just needing something to change.”