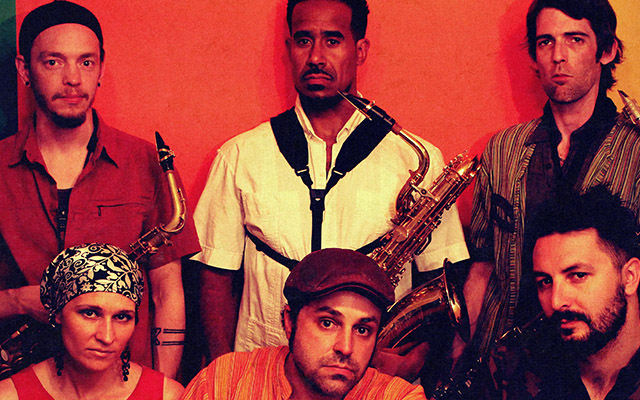 Since first arriving on the Canadian scene at the turn of the millennium, the Souljazz Orchestra has never stopped pushing the limits of its signature sound: an explosive clash of Soul, Jazz, Afro, Latin and Caribbean styles, unleashed by blaring majestic horns, and an arsenal of earth-quaking percussion.

The multicultural collective surfaces with a hard-hitting new record for the fall of 2015 – Resistance. “We approached this album with a fresh ear,” explains composer Pierre Chrétien. “We were keen to build on the band’s sound and message, so I brought in some of the French Caribbean and Francophone West African influences that I've loved since my youth.” Consequently, the new album adds fresh dance-floor-oriented elements of Coupé-Décalé, Zouk, and Ndombolo to the band’s heavy mix of afro, soul and jazz styles.

Now celebrating its 13th year, the Souljazz Orchestra continues its impressive run of memorable albums. Breaking through on Toronto label Do Right!, Freedom No Go Die (2006) and Manifesto (2008) set the bar high. Rising Sun (2010), Solidarity (2012) and Inner Fire (2014), the group's first three albums with Strut Records, were subsequently recognized as landmarks within their respective genres, going on to be nominated for multiple JUNO Awards in Canada.