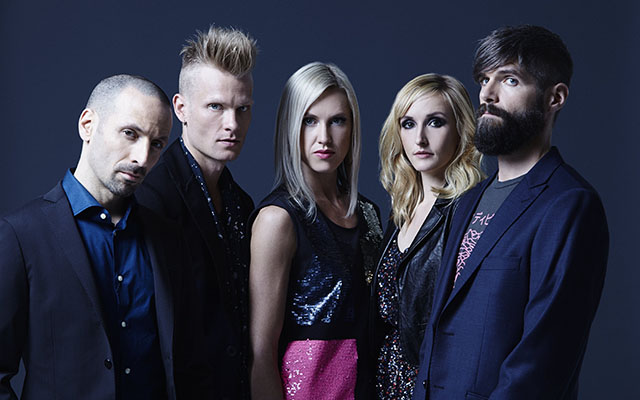 Mother Mother has always reveled in contradiction – ergo Very Good Bad Thing “It’s the person, the humanoid…that’s the very good bad thing.” For Ryan Guldemond, there is no denying the human condition in all its tragic, conflicting nature.
Two years after the Juno-nominated The Sticks, the band’s apocalyptic 2012 album steeped in isolation and dread, the Vancouver quintet returns with its fifth studio album: an edgy, synth-heavy, club-driven rock record filled with massive hooks.
But as is the band’s trademark, behind the gauzy boy-girl vocal harmonies, angular guitar lines and infectious rhythms lies something deeper and darker.
Mother Mother come out swinging on “Get Out The Way,” a super-charged call to arms Guldemond describes as not letting anyone to get in the way of your truth, whatever your truth may be. “I know I’m supposed to integrate,” he snarls, “but how’s about instead I inch away?”
No subject is taboo for Mother Mother on Very Good Bad Thing: male body image (“I Go Hungry”), morning-after self-loathing (“Have It Out”), bullying and suicide (“Kept Down”, inspired in part by the death of Amanda Todd). Close to 10 years after it formed, Mother Mother is embracing its true nature. And it speaks volumes.