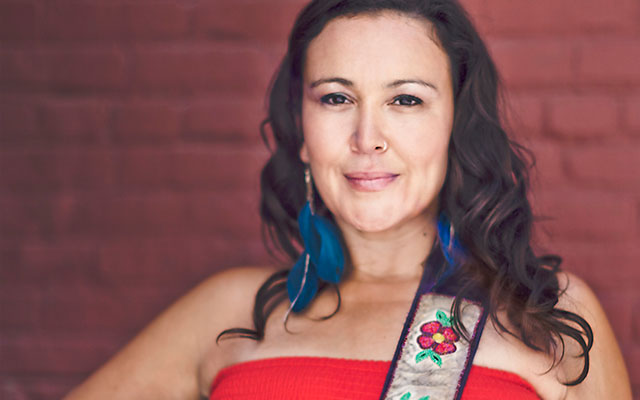 Aboriginal Album of the Year  2015

Leela Gilday , Heart of the People

A passionate singer/songwriter and soulful performer, Leela Gilday has a voice that comes straight from the heart. Confessing her stories to her audiences with a gutsy and open stage presence, Gilday weaves her experiences as a northerner, a Dene woman, and a traveler into beautiful worlds that transport the listener.
With four full-length recordings and a long touring history, Gilday has numerous national awards to her credit. But above all, she seeks connection with her audiences through music, and with each record brings more unique stories to the world. Whether it’s an anthem for the oppressed, or an upbeat song about mortality, she infuses her songs with a sense of humour as well as a sense of social justice, and an ironic appreciation of human folly.
Based in Yellowknife, Leela has toured with her band in every province and territory in Canada, and internationally through several countries. Her live shows, and many appearances on television and radio have earned her an important place in the Aboriginal music scene, and a loyal mainstream following.
Her new record Heart of the People resonates with the heartbeat of the earth and the connection we all have to it as human beings.