TORONTO – The Canadian Academy of Recording Arts and Sciences (CARAS) and Slaight Music announced today the roster of emerging artists selected for the 2022/2023 Allan Slaight JUNO Master Class program. Anna Sofia, Aysannabe and Katie Tupper join grand prize winner of the 2022 CBC Music Toyota Searchlight award, Chad Price, for the mentorship program, which is customized to meet each of the artist’s unique needs and help them become “JUNO ready.”

Voted in by a Super Jury of music industry notables, the four finalists will take part in a workshop running from October 24 to 28 in Toronto, which includes vocal and stage performance coaching, as well as sessions with industry leaders. The artists will also attend JUNO Week 2023 in Edmonton, AB and one finalist will be selected to perform at the JUNO Opening Night Awards Presented by Music Canada. 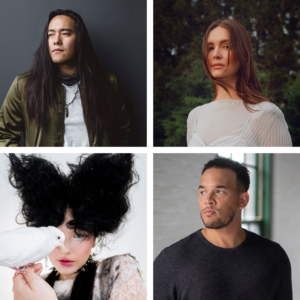 “It’s moving to see the lasting effects of my father’s impact on the Canadian music industry,” said Gary Slaight, President & CEO, Slaight Communications. “His contributions have enabled us to provide budding artists like these ones with the skills they need to succeed in their careers. We’re thrilled to be a part of their paths to achievement.”

“We feel so energized by this year’s roster of artists, who each bring their own unique sound and identity to the table,” said Allan Reid, President and CEO, CARAS/The JUNO Awards. “We can’t wait to see them flourish on the national scale, while learning from some of the best in the business.”

Born in 1931, Allan hosted his own radio program, Spins and Needles, a late night jazz program, at age 16 at CHAB in Moose Jaw, Saskatchewan. He moved to Edmonton in 1950, working his way up the ladder being appointed in 1956 as the National Sales Manager at CHED. There he came to the attention of Allan Waters, owner of CHUM Radio in Toronto, who hired Allan to turn around the fortunes of his struggling station. Allan’s programming, promotions, and business acumen propelled CHUM into a household name.

Allan left the station in 1966 to coordinate programming and sales of Radio Caroline, the infamous pirate radio station. He returned to Canada in 1967, to become the President and General Manager of Stephens and Towndrow.

An inductee into the Broadcast Hall of Fame (1997), the recipient of an Honorary Doctor of Commerce from Ryerson Polytechnic University (2000), appointed a Member of the Order of Canada (2001), the recipient of the Walt Grealis Special Achievement Award (2005) for his contribution to the growth and development of the Canadian music industry, Allan has also maintained a lifelong interest in conjuring.

Slaight Music was started in 2011 with a mandate to support the Canadian music community through a variety of initiatives and to develop Canadian talent via strategic partnerships with industry peers.