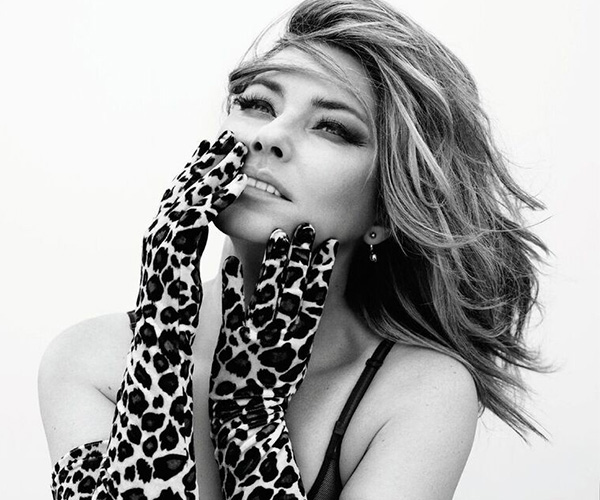 Shania Twain is a world-wide music phenomenon: more than 41 million albums sold in the U.S. and over 4.2 million albums in Canada; the top-selling female artist in history; multi-platinum album sales in 32 countries including Canada, Australia, the UK, Indonesia, Holland and Norway; the sixth biggest selling album of all time; 16 Top Ten hits, half of which reached  No. 1; and the list continues.

This Spring, Twain’s highly anticipated autobiography hits bookstores, chronicling her extraordinary life and remarkable musical journey, plus the songstress is set to debut a docu-series on OWN: The Oprah Winfrey Network, titled “Why Not? With  Shania Twain.”Twain took the country music scene by storm in 1995 with the release of THE WOMAN IN ME, bringing a catchy, never-heard-before pop sensibility to the genre. The first single from the album, “Whose Bed Have Your Boots Been Under” caught everyone’s attention, but it was the brash and sassy “Any Man of Mine” that really set the tone for Twain’s impact on country music.  A runaway hit, complemented by a video that debuted Twain’s star power, the song rose to the top of the charts, followed quickly by the equally attitude-filled “I’m Outta Here.”

THE WOMAN IN ME went on to sell over 12 million copies in the U.S. and nearly 400,000 copies in Canada, replacing Patsy Cline’s Greatest Hits as the bestselling album by a female country artist. Twain became a mainstay on the awards stage in 1996 earning two JUNO Awards including Entertainer of the Year, her first Grammy for Best Country Album and just about every major global music award.

She continued her incredible momentum with COME ON OVER in 1997, which spawned four consecutive record-breaking No. 1 hit singles: “Man, I Feel Like A Woman!,” “That Don’t Impress Me Much,” “Love Gets Me Every Time” and “You’re Still The One.”

With sales of 19 million copies in the U.S. and two million in Canada, the album became the biggest seller by a woman in any genre of music, and is the highest selling record in the Nielsen SoundScan era –establishing her as a bona fide international superstar.

Following two wildly successful albums, Twain set out on a 19-month tour and performed for more than 2.5 million fans. The “Come On Over Tour” was the highest-grossing tour in country music history.  At the top of her game, she finally took a well-deserved break and welcomed her greatest accomplishment, her first child. But fans couldn’t get enough Shania, and she didn’t keep them waiting for long.  In 2002, Twain released UP!, a double-CD set that offered a country version and pop mix of songs to the delight of her fans, who snapped up nearly three million copies in less than a month.

The first single, “I’m Gonna Getcha Good,” once again proved her prowess as a songwriter and performer, and garnered Twain three more JUNO Awards in 2003. Certified at 10 million U.S. sales and over a million in Canada, UP! made Twain the only artist in history to have three consecutive diamond RIAA-certified albums — the other two being THE WOMAN IN ME (12x platinum) and COME ON OVER (19x platinum). With three powerhouse albums to draw from, SHANIA TWAIN’S GREATEST HITS was released in 2004, with Canadian sales topping close to a million.  “I wanted to put together all of my favourite songs from over the years for a fun, high-energy album,” said Twain. “And it was exactly that, as well as a dedication to all of the passionate fans who have enjoyed and supported me throughout the years.”

In 2005, Twain received one of the nation’s most prestigious honours and became an Officer of the Order of Canada in recognition of her contributions to Canadian culture and society.