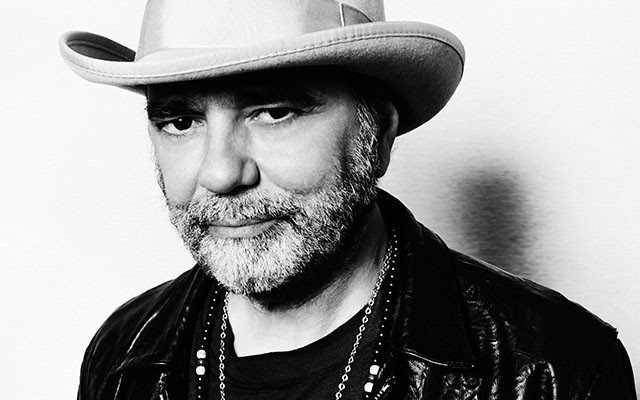 "Here Is What Is", "Not Fighting Anymore"- Daniel Lanois

"Hitchhiker" - Neil Young, "I Believe In You" - Black Dub

So- Peter Gabriel, The Joshua Tree- U2

Most Promising Male Vocalist of the Year

Here Is What Is- Daniel Lanois

"Here Is What Is", "Not Fighting Anymore"- Daniel Lanois

"Hitchhiker" - Neil Young, "I Believe In You" - Black Dub

So- Peter Gabriel, The Joshua Tree- U2

Male Vocalist of the Year

Most Promising Male Vocalist of the Year

One of the most distinctive and celebrated producers of his time, Daniel Lanois was also a gifted composer and solo artist; whether performing his own material or helming records for the likes of U2, Bob Dylan, and Peter Gabriel, the hallmarks of his singular aesthetic remained the same. Noted for his unparalleled atmospheric sensibilities, Lanois pursued emotional honesty over technical perfection, relying on vintage equipment and unorthodox studio methods to achieve a signature sound both viscerally powerful and intricately beautiful. He was born September 19, 1951 in Hull, Quebec; his French-Canadian family was firmly rooted in music, with his mother a singer and both his father and grandfather noted for their prowess on the violin. Following his parents’ 1963 separation, Lanois and his mother moved to the English-speaking suburbs of Hamilton, Ontario; there he learned to play guitar, and with his brother, Robert, began making primitive home recordings on a cheap cassette player. In 1970, the siblings purchased a four-track machine, setting up a recording studio in the laundry room of their home and offering their services to local bands for a $60 fee.

Regularly aiding their clients not only as producers but also as songwriters and arrangers, the Lanois brothers’ reputation quickly spread, and as the decade drew to a close, they were able to graduate to larger recording facilities, which they dubbed Grant Avenue Studios. There — after sessions for performers as diverse as Ian Tyson and children’s artist Raffi — Daniel first worked with Brian Eno, who in the decade to follow would emerge as Lanois’ chief mentor and frequent collaborator. Together, they spent several weeks working on instrumental ambient material, experimenting heavily with sonic manipulation techniques; when Eno eventually returned to the U.K., Lanois remained in Ontario, recording a series of LPs for the local band Martha & the Muffins and, in 1983, producing improvisational trumpeter Jon Hassell’s album Aka/Darbari/Java. In 1984, after working with Eno on Hybrid (a collaboration with guitarist Michael Brook) and The Pearl (another collaborative effort, this time with Harold Budd), Lanois responded to Eno’s call to co-produce U2’s The Unforgettable Fire; the album was a major hit, and it so impressed another superstar, Peter Gabriel, that he invited Lanois to co-produce the soundtrack to the motion picture Birdy.

So Lanois next scored with 1986’s So, Gabriel’s brilliant commercial breakthrough. However, it was his and Eno’s second collaboration with U2, 1987’s The Joshua Tree, which launched him to true fame: after the album won a Grammy — and after he subsequently co-produced Robbie Robertson’s long-awaited solo debut — Lanois emerged as one of the best-known and most respected producers in contemporary pop music. In 1989, he masterminded Bob Dylan’s Oh Mercy — widely regarded as Dylan’s best work in over a decade — as well as the Neville Brothers’ Yellow Moon, an artistic watershed for the venerable New Orleans group. By this time. Lanois himself was a resident of the Crescent City, setting up Kingsway Studio in a mansion in the heart of New Orleans; there he crafted his own hotly anticipated solo debut, 1989’s Acadie. Two years later, he reunited with U2 for the stellar Achtung Baby, and in 1992, re-teamed with Gabriel for the wonderful Us. In 1993, Lanois issued the lovely For the Beauty of Wynona; however, like Acadie, it failed to reap the same commercial awards as his other production ventures. Other albums of note include Emmylou Harris’ 1995 masterpiece Wrecking Ball, Luscious Jackson’s Fever In Fever Out, Willie Nelson’s Teatro, and Dylan’s 1997 comeback Time Out of Mind; in between, Lanois also recorded the score to the 1996 film Sling Blade. Lanois scored again with U2’s All That You Can’t Leave Behind at the end of 2000, along with working with Joe Henry and others in a support capacity. 2003 saw the year of his third and finest recording, Shine, that featured guest performances from Emmylou Harris and Bono. In 2005, he released the outtake-filled “renegade CD” Rockets through his website, which was followed quickly by Belladonna, a proper album release on Anti. Soon after, photographer Adam Vollick started filming the next year-and-a-half of Lanois’ life, following him on the road, with celebrity friends, and in his second home, the recording studio. Here Is What Is was released on DVD in 2008.